Moose Jaw was incorporated as a community on February 13, 1884 under the guidance of Mayor Ross. At a town council meeting on May 12, 1884, Council looked over two applications for town constable. One was submitted by James Flynn and the other by J. M. Simmington. Simmington received the job on a trial basis at a rate of pay of fifty dollars per month. Flynn lost out in the competition even though he boasted about being a jailor from Winnipeg and that he owned a revolver, handcuffs, and a rope that had been serviced. Soon after, the temporary position became full time, combining the duties of town constable with those of license inspector.

That same year in June, Town Council recommended that they purchase the handcuffs and baton from Flynn for $7.50.

On March 14, 1898 council appointed W. M. Lambert as a policeman for the town of Moose Jaw. On May 9, 1898 John H. Parry was appointed by town council as policeman and tax collector.

In 1899, council fired the easygoing Inspector and hired O. H. Sackrider to keep tabs on the local drunks. Sackrider did his job so well that the town had to acquire a proper lockup for the prisoners. The basement of the town hall was converted for this purpose. Sackrider also doubled as the Chief of the volunteer fire brigade.

Moose Jaw became a city on November 1903 and had a Chief of Police by the name of W. A. M. Fox. At that time the department was made up of three patrol sergeants, fifteen constables and one matron.

In 1904 City Hall doubled as the police station and was situated on the Southeast corner of Fairford and 1st Avenue N.W.

One of the main concerns in 1905 was to “get rid of the houses of ill fame in the parks.” The Chief of Police hired to accomplish this task was Walter Palmer Johnson. He took on the challenge on September 5, 1905 and according to history, turned the police into a well-organized force. Johnson performed this capacity for over 20 years and continued to keep the force disciplined and organized during Moose Jaw’s infamous Red Light Days. The Red Light Days were a result of the CPR moving its divisional headquarters from Regina to Moose Jaw. Later the Soo Line also came in from Minneapolis. This influx of activity caused gambling, drunkenness, and houses of “ill manner”. Police work involved keeping this activity confined to River Street. Police were constantly breaking up fights between CPR and SOO Line people. Many Reginians would make the round trip on the CPR for $1.00 to take part in the festivities of our famous River Street. Many people thought Regina did not need a Red Light District because Moose Jaw was so easily accessible.

Under Johnson’s leadership, the Police Force, as it was then known, developed into a force to be reckoned with. They had one horse and the constable in charge of the horse was a colorful figure named Andy Boland. No parade was started without Boland leading the way. He would do most police work on horse back until his retirement in the 1920s. At this time a motorcycle was added to the fleet of police transportation.

In 1911, the Moose Jaw Police Force purchased its first motorized vehicle. It was a gray Dodge Dart and was purchased at a price of $3000.00. It was used in serving summonses and bringing helpless drunks to the police station. A fellow by the name of H. O. Osmond was hired to drive the car and keep it tuned up.

Around WW1, Moose Jaw police also opened a substation. The substation, which was a shack addition built onto the South Hill Fire house at 270 Iroquois Street West, was staffed by two constables and one sergeant. 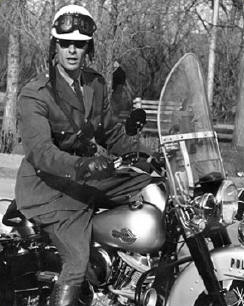 History tells us that there was a constable at this time by the name of George Shook. He stood a massive 6 foot 4 inches and weighed in at 250 pounds. A story circulated about Shook and his ability to keep the peace. A logger from British Columbia who had nearly wrecked some towns on his way East, found himself in jail one morning after a big drunk. He promptly asked how many officers it took to put him there and he was told only one, George Shook. The logger later met Shook and had no further questions.

In the early 1900s the Police Department provided two sets of uniforms. One was a gray suit and a white helmet for summer wear. The other was a dark blue suit and cap for the winter. A raincoat, fur coat, and a long black coat were also issued.

In 1920, a second police vehicle was purchased, a McLaughlin auto, model K63.

Cleaning up the police department was the task of the 1920s. Anti-liquor authorities from Regina were concerned about rumors that the police were protecting some of the prohibition offenders. The most significant shake up occurred on February 18, 1924. At that time, residents of Moose Jaw woke up to a bombshell. Seven constables had been arrested and two others suspended after a lengthy investigation into a mysterious series of robberies at a number of stores in the city. Chief Johnson’s investigation concluded that the constables had stolen suits, over coats, sweaters, shoes and ladies clothing. The majority of the goods were stolen from Robinson-MacBean limited. The clerk’s office at the police station at the time of the arrests resembled a dress goods store. As evidence unfolded, it was discovered that the robbers/cops had gained possession of a key to the rear door of the store. They entered the store while on night duty, collected the articles and carried them away to a safe place. In the end several of the officers were found guilty and sentenced to months of hard labor.

Chief Johnson remained on the police force until 1927.

In 1937 Johnson ran for Mayor of Moose Jaw and was successful. 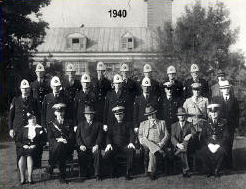 John Fyvie succeeded Johnson as Chief. Fyvie remained in that position for ten years. The present trousers worn by the members of the police force were first introduced in 1927. An article from the Moose Jaw Evening Times read “Policeman soon to wear new blue serge uniforms. As soon as slight alterations have been made to some of the garments, the members of Moose Jaw police force will appear on the streets clad in new blue uniforms. The new uniforms being issued are a heavy blue serge material and each suit is tailored to be a perfect fit for the officer. Narrow stripes of red braid, full length down the side of the trouser and silver buttons serve to set off the blue.”

Sometime in the 1950s police cruisers were equipped with two-way radios that impacted the response time to calls for assistance.

The radio control center was situated at the police station on 1st Avenue N.W. In the early 1960s, Moose Jaw Police established a Traffic Unit complete with a “state of the art” radar system.”

The year 1981 saw the hiring of the first female officer at Moose Jaw Police Service. City Hall expanded in 1985 and the police service moved into its present location situated at Main Street and Fairford West.